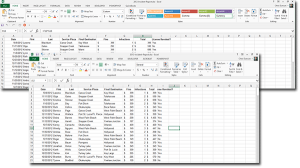 The introduction of the Ribbon in Microsoft Office 2007 programs rocked a lot of peoples’ worlds. In fact, it was the number one reason many long-time users felt compelled to go back and starting taking software classes.

It’s ubiquitous today, but there was a time when many people predicted its demise. And that day is – almost – upon us. As Microsoft struggles to make their software work on every device – desktop, laptop, pad and phone – the Ribbon became a significant stumbling block. After all, you can only make buttons so small, and users scream when you leave an option out of one device that they can use in another version. Can you imagine four different versions of Excel wandering around, each with its own capabilities?

Instead, Microsoft has been working to make the Ribbon more malleable. Compare these two screenshots of the same document open on my desktop computer (top), and my laptop (bottom). A quick scan of the Ribbon reveals a lot more choices on my desktop screen. But truthfully, all of those choices in the Styles group are also available on my laptop, they’re just hidden under the Cell Styles button.

So, there it is, in black and white. Your worst fears realized: Microsoft has been hiding things from you!

In fact, there’s a lot more hidden right in front of your eyes. Some groups on the Ribbon have a special button to the right of the Group name called the dialog box launcher. Not all Groups have a dialog box launcher, but you should take a few minutes and poke around on the ones that do.

Here in the video I’ll take a look at the dialog box launcher in the Font group of Excel. Choices that are available there that are not on the ribbon include Strikethrough, Superscript and Subscript.

Show, Minimize and Hide the Ribbon

Whenever you are working with a minimized Ribbon and you click off of it, however, the Ribbon will return to its minimized state.

To get the Ribbon to return to its normal appearance, just double-click on a tab again.

There is also a new button on the title bar in Office programs that gives you more control over the Ribbon. It is located in the top right between the Help button and the Minimize button. If you click on it, you’re offered three choices: Auto-hide Ribbon; Show Tabs; and Show Tabs and Commands.

With the Ribbon maximized you’re already on Show Tabs and Commands, as evidenced by the dark color behind the icon. And you’ve already seen the Show Tabs choice when you double-clicked on a Tab. How about that third choice to Auto Hide Ribbon? Try it and see what happens!

In the video you’ll see that your entire Ribbon is gone now. To get it back temporarily, just click at the top of the screen.

If you want it to come back full-time, click the Ribbon Display Options button and choose Show Tabs and Commands from the dropdown.
Whew! That was a long tip, but I hope it helps you compute happier. Best wishes for a great day!